Avoid warping in Ableton if you don’t have to.  I saw our friend Victor Menegaux of BarBangerz.com write something on Facebook a month or two ago, basically yelling at DJs for ruining the quality of songs by warping in Ableton.  It definitely made me think.  For those who don’t know, when you warp a song, the program does have to alter it somewhat.  Most of the time, it’s very subtle and you don’t really notice it, but still, it does take a little something from the original.  So if you are concerned about the quality of your stuff as much as we are, there is a simple fix you can make on most of your edits:  Take the warp off on the meat of the song AFTER your intro drums or AFTER the transition part.  We are all kinda spoiled these days with having our music perfectly gridded (warped) when we make edits.   But hopefully you all know that you can still drag unwarped parts of songs to where they belong by looking in closely at the waveforms (and using the previous portion of the song as a reference).  Here’s two simple examples of what I’m talking about…

1)  The Mikael Wills remix of Thrift Shop is 105 BPM.  However, the intro drums are 128 BPM.  I started by warping the whole thing.  Then, I cut and pasted the flat 105 BPM drums from the end of the song to the beginning to make an ALL 105 edit.  At the start of the 9th bar where I cut to the main part of the song (one long unchopped part), I took the warp off since I would not be doing anything from there on out.    I made sure that if I kept the 105 BPM flat drum loop going, the unwarped part starts on beat right where it should.

2) I made my own little transition from the Qulinez “Sweet Nothing” Remix into the Diplo trap remix.  I made sure the tempo was already up to where it needed to be when the switch to the trap mix was made.  Then, I unwarped the Diplo remix, since I wouldn’t be touching anything in the song once it came in.

*  Changing the tempo messes up the placement of unwarped parts.  You need to make sure you have the BPM set to where you want it before unwarping a track.

**  Again, this is really only for the last part of any edit, since you don’t need it to be PERFECTLY on beat/gridded if you aren’t gonna be touching the rest of the track.  If you are making a mixtape, you probably wouldn’t want to unwarp anything on it, since you are gonna be constantly adding more songs.

*** I warp in Ableton all the time….everyone does.  Please keep in mind this whole thing is just something to do to make you sound a small percentage point better.  Basically, something easy that you might as well do because you can.  This wasn’t intended to scare you from warping and using Ableton in general — in most cases you won’t be able to hear the difference.

Convert With Ease!  This summer I ran across a great audio converter for the Mac, Xilisoft Audio Converter (also available on the iTunes App Store for $30).  I use this program ALL the time to convert our Remix Report videos to MP3 podcasts, to quickly convert MP3’s to lower bitrates to quickly send examples to people in email and to convert my weekly radio show from WAV to MP3 format.  While these examples are pretty standard, this converter also offers conversion from and to AVI, MPEG, WMV, MP4, FLV, MKV, H.264/MPEG-4 AVC, AVCHD, MP3, WMA, WAV, AAC, FLAC, OGG and more.  It also gives you complete control of the audio settings for each format.  You can change the bit rate, sample rate, stereo/mono and then you can save your favorite setting as presets for quick recall.

One of the main reasons I love using a converter other than iTunes is that my iTunes library doesn’t get clogged up with random audio examples and rough drafts of projects I’m working on.  This saves my iTunes library for what it’s meant for, my main music library.  I can also call us audio presets much quicker than having to manually reset the import settings in iTunes preferences.  If you do a lot of converting, Xilisoft Audio Converter is for you. 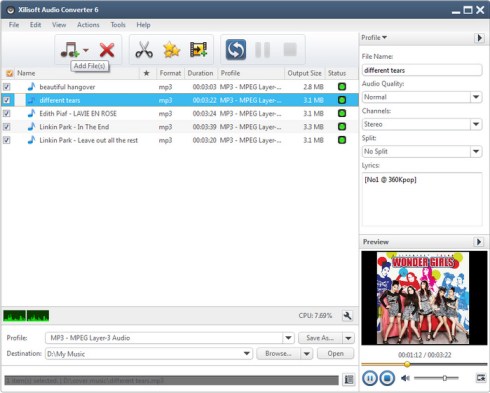